Luncheon Seminar | Writing after the Middle East’s ‘1979 Moment’: The Grounds for Comparison? 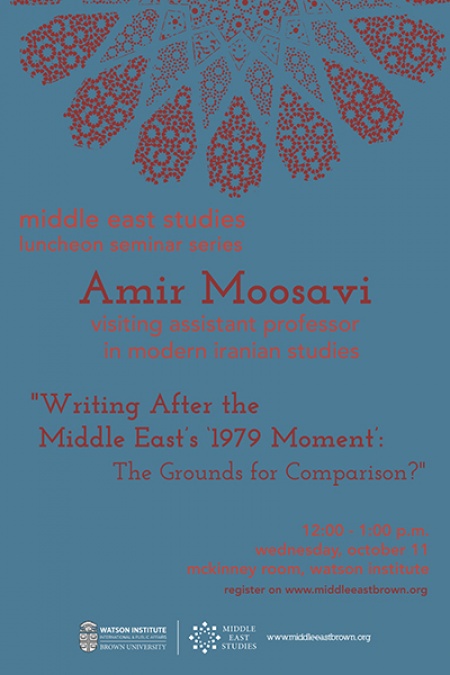 Registration is at capacity. MES will hold space and lunches until 12:00 p.m. after which seminar seating and lunches will be opened up to those on stand-by.

Abstract: My presentation proposes to a periodization of contemporary literatures emerging from the Persianate and Arab worlds based on the vast amount of writing treating war and political violence in approximately the last three and half decades.  Looking at the Eastern Arab World, Iran and Afghanistan, I propose reading contemporary Arabic and Persian literatures against a backdrop of wars, the concurrent rise of political Islam and decline of leftist political movements across the region. I argue that not only did the experience of war produce a body of works in both languages that treat similar themes, but that it also affected the form of fiction emerging from this region. In this way, the presentation will point to the proliferation of texts espousing experimental literary techniques and an abandonment of the ideological and thematic concerns of committed literature that had previously dominated literary production in these countries. The greater goal of the project is to push modern literary scholarship from this region of the world beyond models that rely so heavily on national and linguistic boundaries and into a transnational and multilingual framework based on historical and sociopolitical context, strategies of narrative and aesthetic choice.

Bio: Amir Moosavi is currently Visiting Assistant Professor of Modern Iranian Studies in Brown University's Middle East Studies Program. Prior to arriving at Brown he received his PhD in Middle Eastern and Islamic Studies from NYU and ​was a postdoctoral fellow at the Forum Transregionale Studien in Berlin. Broadly speaking, his research interests are modern Persian and Arabic literatures, cultural representations of war, and Persian and Arabic language pedagogy. He is currently working on a book manuscript that examines Iranian and Iraqi literary narratives of the Iran-Iraq War.