Magic Lantern Cinema | A Pre-Symposium Screening for "Afterlives of Witnessing: Moving Images from the Levant and the Political Imagination" 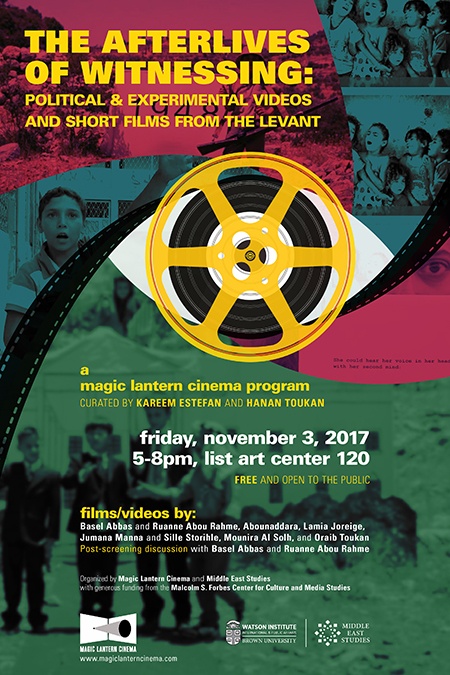 Open to the Public.

Made possible through generous funding by the Malcolm S. Forbes Center for Culture and Media Studies, and the Adrienne Minassian gift in honor of Dr. Marilyn Jenkins-Madina '62

In the company of fellow Syrian filmmaker Mohammad Malas, Omar Amiralay revisits the ruins of the destroyed Golan village of Quneytra, occupied by Israel and then abandoned following the 1973 war, as he reflects on the first time he heard of Israel. Amiralay (1944-2011) was a groundbreaking documentary film director and a prominent civil society activist known for his political criticism of the regime.

Now Eat My Script is a story of war and displacement, and a story about storytelling, that withholds representations of violence as it evokes, through the feminist narration of a pregnant writer, the present conflict in Syria, the 1975-1990 Lebanese civil war, and the experience of traveling between Beirut and Damascus. Mounira Al Solh (b. 1978, Beirut) is a visual artist with a practice embracing video, installation, painting and drawing, embroidery, and performative gestures.

Based on Skype conversations with Palestinian photographers, fixers, and drivers whose efforts were behind images that were transmitted from screen to screen during Israel's 2014 war on Gaza, Oraib Toukan’s When Things Occur probes the face of mourning and grief—its digital embodiment, representation, and circulation. Toukan (b. 1977) was born in Boston and grew up in Amman; she works across photography, video, text, and installation, often using current affairs as source material.

Abounaddara is an anonymous collective of Syrian filmmakers that emerged at the onset of the civil uprising that led to the Syrian Civil War. Abounaddara—Arabic for “man with glasses”—produces one short video portrait every week and posts it online, showing individual Syrians on all sides of the conflict and providing an immediate and alternative image of Syrian society.

Drawing from notes taken by Joreige during the 2006 Israel-Lebanon War, this film resembles yet is not a diary of war. Nights and Days expresses the uncanny sense of time passing in an apprehensive state of waiting, and features a journey to south Lebanon, which was devastated by the war. Joreige (b. 1972, Beirut) is a visual artist and filmmaker, and a co-founder and board member of the Beirut Art Center.

With the help of a cast of children, this experimental documentary investigates the foundations of the ideology and self-image of modern Norway – from the Crusades to the diplomatic theater of the Oslo Accords. Shot in Norway and Palestine, the film combines the children's performances with archival sound recordings including President Clinton speaking at the signing of the Oslo Accords. Jumana Manna (b. 1987) is a Palestinian artist working primarily with film and sculpture to explore how power is articulated through relationships, often focusing on the body and materiality in relation to narratives of nationalism and histories of place. Sille Storihle (b. 1985) is a Norwegian artist and researcher living in Berlin and Oslo and investigating gender politics, nationalism, and history with moving images.

Layering images collected from Palestine and elsewhere over five years, Only the Beloved Keeps Our Secrets weaves together a fragmented script sampled from online recordings of everyday ritual and performance (song and dance) in an accumulation of constant testament and constant erasure.

Abbas and Abou Rahme (b. 1983) work together across a range of sound, image, text, installation and performance practices. Their practice probes a contemporary landscape marked by seemingly perpetual crisis and an endless "present," one that is increasingly shaped by a politics of desire and disaster. They have been developing a body of work that questions this suspension of the present and searches for ways in which an altogether different imaginary can emerge. In their projects, they find themselves excavating, activating and inventing incidental narratives, figures, gestures and sites as material for re-imagining the possibilities of the present. Overwhelmingly their approach has been one of sampling materials (both existing and self-authored) in the form of sound, image, text, objects and recasting them into altogether new "scripts." The result is a practice that investigates the visceral, material possibilities of sound, image, text and site, taking on the form of multi-media installations and live sound/image performances.