Materiality of Migration Lecture Series | Leave No Trace? Materiality, Temporality, and Visual Culture at the Gateway to Europe 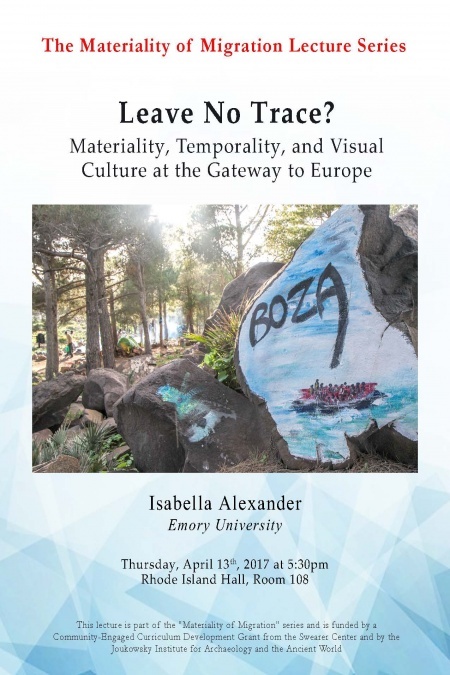 Opening with a clip from her latest documentary film, The Burning: An Untold Story from the Other Side of the Migrant Crisis, Dr. Isabella Alexander (Visiting Assistant Professor of Anthropology at Emory University) will draw on multiple years of ethnographic research at one of the world’s most trafficked borders to discuss the current migrant and refugee “crisis” from the marginalized perspective of those who remain trapped on the periphery to the E.U. in Morocco’s sprawling forest camps. Morocco lies less than eight miles from Spain, and the colonial-era Spanish enclaves that still exist in northern Morocco make it the only African nation to share land borders with Europe. It is therefore one of the primary crossing points for all African migrants and refugees fleeing political or economic insecurity in their home countries and is central to multilateral debates on border security. “Hrig,” the Moroccan Arabic term for “illegal immigration,” translates to “burning.” It signifies the literal burning of one’s identification papers in order to avoid repatriation if arrested by European authorities, but also the symbolic burning of one’s past in hopes of a better future on foreign soil. Incorporating images from the illicit makeshift encampments that house hundreds of thousands of men, women, and unaccompanied minors who have journeyed from western and central Africa to reach the final border to Europe, this talk will center on the study of materiality in relation to modern migrations. As both a researcher and a documentary filmmaker, Dr. Isabella Alexander will raise critical questions about participation, representation, and the possibilities and limitations of community-filmmaking techniques. How must we adapt the foundational concepts of liminality and belonging in the face of new migrations, and what role can anthropology play in doing so?

This event is aligned with the Mellon Sawyer "Displacement and the Making of the Modern World" series.

Joukowsky Institute for Archaeology and the Ancient World