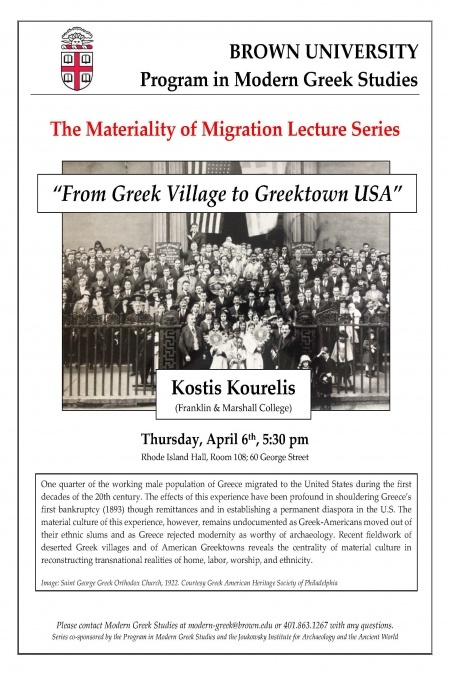 One quarter of the adult male population in Greece migrated to the United States during the first decades of the twentieth century. Following national bankruptcy in 1893 and military defeat in 1897, this exodus reflects the nation-state’s first demographic crisis (half a million people) matched by the 1922 Asia Minor refugee crisis (1.5 million people). A state of foreignness, or xenitiá, was shaped by the double materialities of the Greek village and the American city, from the place of origin to the place of destination. The Morea Project (1990s) and the Deserted Greek Village Project (2010s) have been surveying houses, schools and churches built on remittances sent from America, which constituted Greece’s greatest national product between the two World Wars. The data from Greece is correlated with a growing body of material from American excavations of twentieth-century coalmines, tenements, and ethnic neighborhoods. We focus on Franklin & Marshall College’s survey of Greektown Philadelphia, an ethnic enclave dismantled by urban renewal in the 1960s and further erased by gentrification in the 1990s. Greek Philadelphia’s unique materialities were shaped by the city’s philhellenic past, on the one hand, and multicultural present, on the other. The Greek migrants occupied the abandoned row houses of Philadelphia’s elites who had financed the Greek War of Independence a century earlier. They shared this colonial-era space with three other marginal groups, an African American community mapped by W. E. D. Dubois in The Philadelphia Negro, a Jewish community fleeing Russian pogroms, and a bohemian community celebrated today as the Gayborhood. More broadly, the talk will advocate for an archaeology of global migration and highlight the urgency for the study of Greek modernity over Greek antiquity.

This event is aligned with the Mellon Sawyer "Displacement and the Making of the Modern World" series.

Joukowsky Institute for Archaeology and the Anicent World