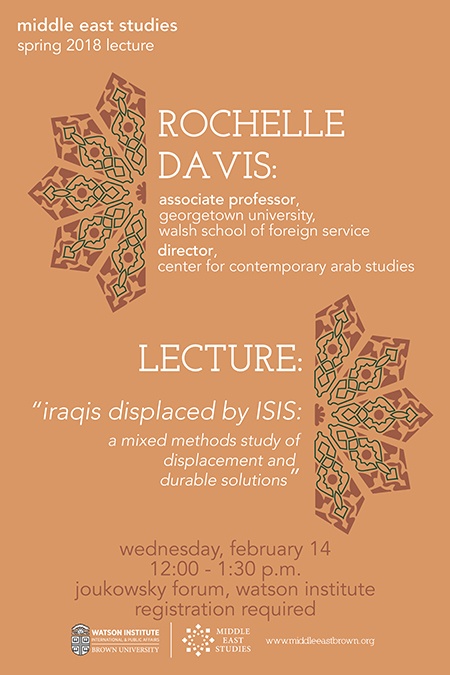 Registration is at capacity. Lunches will be held until the start of the event and thereafter distributed on a first-come, first served basis to those on standby.

Beginning in December 2013, an estimated three million Iraqis were displaced when the Islamic State of Iraq and Syria (ISIS) took over parts of northern, western, and central Iraq. For many Iraqis, this represented yet another rupture in a long string of multiple displacements. Internally displaced persons (IDPs) are scattered throughout the country, mostly to cities, but also to some rural places, in both Arab and Kurdish areas. For more than two years, this longitudinal study with these Iraqi IDPs has focused on their access to "durable solutions" – return, integration, or resettlement. This lecture will detail such issues as housing, livelihoods, security, social cohesion, mechanisms for justice, and access to compensation among IDPs and – since early 2017 – those who have returned to their home areas.

Rochelle Davis’ research is on refugees, war, and conflict, particularly Syrian and Iraqi refugees and internally displaced persons. She is also Senior Researcher on Georgetown's Institute for the Study of International Migration (ISIM)/International Organization for Migration grant, conducting a longitudinal survey of 4000 Iraqi households displaced since 2014 by ISIS/ISIL and their access to durable solutions. Her first book, Palestinian Village Histories: Geographies of the Displaced, (Stanford University Press, 2012) addressed how Palestinian refugees today write histories of their villages that were destroyed in the 1948 war, and the stories and commemorations of village life that are circulated in the diaspora.

She is currently writing a book on the role of culture in the U.S. military wars in Iraq and Afghanistan, based on research she has conducted since 2006. Using interviews with US military service members and Iraqis, policy and strategy documents, cultural training material, journalists' reporting, and soldier memoirs, she focuses on the narratives about Iraqis, Afghans, Arabs, and Muslims.  Her analysis explicates the conundrums of being tasked to be culturally sensitive in a military occupation, and the personal and collective experiences of war. She is also Principal Investigator on the US Department of Education Title VI grant (2014-2018) for Georgetown's National Resource Center-Middle East/North Africa.