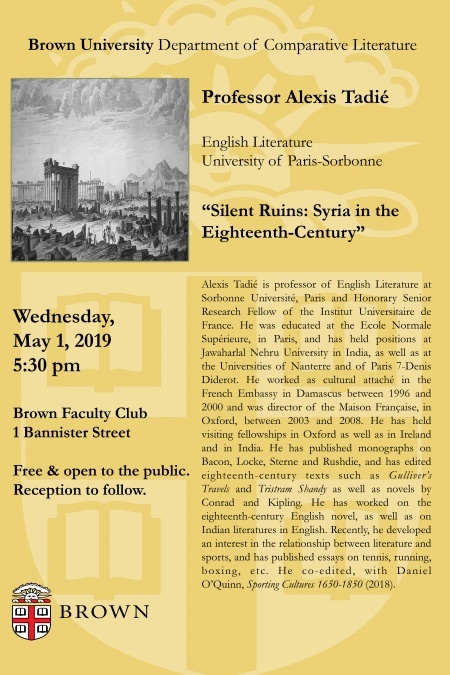 Alexis Tadié is professor of English literature at Sorbonne Université, Paris and Honorary Senior Research Fellow of the Institut Universitaire de France. He was educated at the Ecole Normale Supérieure, in Paris, and has held positions at Jawaharlal Nehru University in India, as well as at the Universities of Nanterre and of Paris 7-Denis Diderot.

He worked as cultural attaché in the French Embassy in Damascus between 1996 and 2000 and was director of the Maison Française, in Oxford, between 2003 and 2008. He has held visiting fellowships in Oxford as well as in Ireland and in India. He has published monographs on Bacon, Locke, Sterne and Rushdie, and has edited eighteenth-century texts such as Gulliver’s Travels and Tristram Shandy as well as novels by Conrad and Kipling. He has worked on the eighteenth-century English novel, as well as on Indian literatures in English. Recently, he developed an interest in the relationship between literature and sports, and has published essays on tennis, running, boxing, etc. He co-edited, with Daniel O’Quinn, Sporting Cultures 1650-1850 (2018).