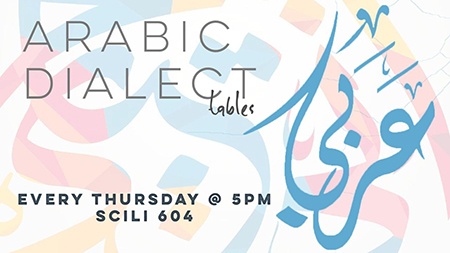 The Arabic Dialect Tables were started by native Arabic speakers here at Brown and citizens of the MENA region (Middle East and North Africa) to try to complement the formal classes with a colloquial and cultural component.

Brown students studying Arabic at Brown are taught Modern Standard Arabic -- the formal written form of Arabic that all native speakers share, no matter where they're from. Through these weekly workshops, we would like to share with you the spoken form of Arabic used by locals in their daily lives: the local dialects. These workshops are tailored towards the general public, so you DO NOT need a background in Arabic to partake in them. It is worth noting, however, that a background in Modern Standard Arabic will be helpful.

Every week, we will be learning about and discussing a different topic with a focus on the Middle East, from feminist authors to memes, from food to political systems, from the refugee crisis to public health. Sign up for any workshop that catches your attention. We'd be glad to have you!

Tania, a Lebanese second-year student here at Brown, will be leading the tables again this year. She will be teaching the workshops in the "Shaami" dialect (Levantine: Lebanon, Syria, Palestine, and Jordan), and we'll hopefully also hold a workshop or two with native speakers of other dialects from the Gulf and North Africa at some point in the semester.

Come through and bring a friend! You won't believe how easy and enriching it is to connect to another culture through language. NO BACKGROUND NEEDED!