Architecture of Counterrevolution: the French Army in Northern Algeria 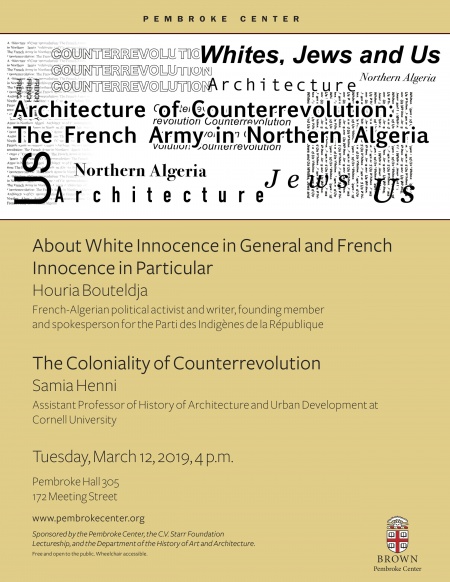 Free and open to the public, wheelchair accessible

Houria Bouteldja and Samia Henni will speak as part of the programming associated with the 2018-2019 Pembroke Seminar, "What Are Human Rights? Imperial Origins, Curatorial Practices and Non-Imperial Ground." Both scholars explore French imperialism’s impact on Algeria

Pembroke Center for Teaching and Research on Women event
Co-sponsored by the C.V. Starr Foundation Lectureship and the Department of the History of Art and Architecture

Houria Bouteldja, is a French-Algerian political activist and writer focusing on anti-racism, anti-imperialism, and Islamophobia. She will give a talk entitled "About White Innocence in General and French Innocence in Particular." Bouteldja argues that the discourse of the white European Left renders a concept of white innocence that implies that its counterpart, postcolonial subjects, are guilty. She will draw from her book "Whites, Jews and Us.

Samia Henni, assistant professor of history of architecture and urban development at Cornell University, researches the history and theory of the built environment in relation to colonialism, displacement, gender, race and war. Her talk, "The Coloniality of Counterrevolution," will focus on three ways that the French military and government altered Algeria’s infrastructure in its intention to maintain colonial rule: through mass population displacement, mass-housing programs, and a new fortified administrative town planned for the protection of French authorities during the last months of the Algerian revolution. Henni will elaborate on ideas from her book "Architecture of Counterrevolution: The French Army in Northern Algeria."