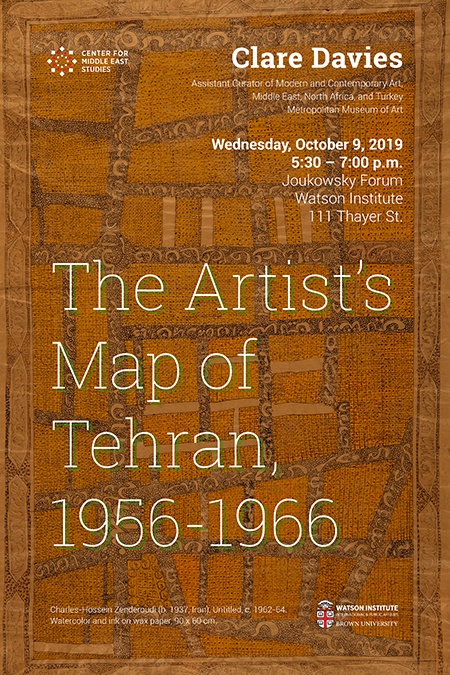 In the mid-twentieth century, the contours of artistic practice in Tehran were shifting dramatically as the city expanded to the north and new cultural institutions were built in the urban center. An ink drawing on butcher paper executed by Hossein Zenderoudi (b. 1937, Iran) in this period doubles as a rudimentary map of Tehran’s evolving artistic hub: an area that housed the College of Fine Arts (est. 1940), the College of Decorative Arts (est. 1960-61), and recently opened galleries of modern art. Nearby, but beyond the borders of Zenderoudi’s handmade map, lay southern Tehran and its famous bazaar: an area increasingly identified at the time with a religious and socially conservative merchant class, the production of traditional arts and crafts, and political opposition to the shah.

This talk explores how the evolving topography of Tehran and its navigation by artists shaped avant-garde practices of the late 50s and early 60s. Davies argues, specifically, that a new generation of artists identified themselves with political networks and public religious rites based in the historic city, even as official and artist-run spaces for the arts multiplied elsewhere. 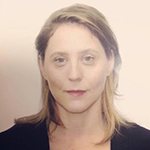 Clare Davies is the Assistant Curator of Modern and Contemporary Art, Middle East, North Africa, and Turkey at the Metropolitan Museum of Art. She has contributed to a wide range of research, programming, and archival projects related to art and photography in the Middle East since serving as associate curator of the Townhouse Gallery in Cairo from 2004 to 2006. She is a graduate of the rhetoric department at U.C. Berkeley and completed her doctoral dissertation on Egyptian modern art at New York University's Institute of Fine Arts in 2014. She was subsequently awarded the inaugural Irmgard Coninx Prize Fellowship at the Forum Transregionale Studien, Berlin.

She is the co-author of Robert Morris, Object Sculpture: 1960–65 (Yale UP, 2014) and has published regularly on contemporary art from the Arab world. Since joining The Met, she has overseen the installation of Yto Barrada's Lyautey Unit Blocks (Play) (2010), curated Siah Armajani: Follow This Line, and organized a scholarly seminar on collecting art from the Middle East. Upcoming projects include Rayyane Tabet / Alien Property–a collaboration with the department of Ancient Near Eastern Art, as well as Spiritual Pop: Art in 60s Iran.