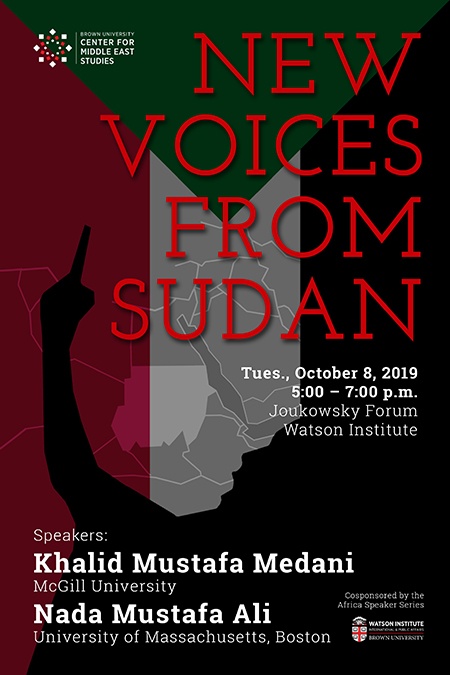 Nada Mustafa Ali will present on “Women, Gender, and Sudan’s 2018/2019 Uprising,” drawing on her ongoing research from a gender and a feminist perspective. Women played key roles in Sudan’s 2018/2019 uprising which unseated Sudan's former president Omar al-Bashir and outlawed the ruling National Congress Party. Gender inequality and violations of the rights of women in different parts of Sudan was a key feature of the regime's policies. Nada Mustafa Ali uses a gender and a feminist perspective in contextualizing and analyzing the uprising as well as Sudan’s transition. What does change mean for Sudan’s diverse men and women? What role are women’s organizations and movements playing in the transition? How can the people of Sudan learn from the country’s history of transitions and short democratic periods? And what can they learn from the “Arab Spring” and from post-conflict experiences in various African countries? Professor Ali will draw on fieldwork in Sudan as well as on digital ethnographic research on social media, social movements, and social change that she started in 2014.

Khalid Mustafa Medani (’87), will present a lecture on an often-neglected element associated with the rise (and fall) of authoritarianism, the emergence of Islamic political movements, and the local dynamics of ethnic conflict in the Middle East and Africa: the role of informal commercial and social networks. Specifically, and drawing on many years of research conducted in Sudan, Egypt, Somalia and Morocco, Dr. Medani will discuss the similar (as well as contrasting) ways in which informal networks have underpinned the historic popular protests that ended 30 long years of authoritarian rule in Sudan; provided the context for the emergency of militant Islamist activism in Egypt and Morocco; and greatly influenced the dynamics of ethnic politics in Somalia.  Professor Medani’s portion aims to initiate an open and critical discussion pertaining to the prospects and obstacles for popular mobilization and democratization in the region; illuminate some of the factors associated with the question of why a small minority of youth join extremist groups; and question the securitization of informal networks reflected in the ongoing global war on “terrorist” finance.

Cosponsored by the Africa Speaker Series

Nada Mustafa Ali is a scholar who engages with questions about social change and transformation in Sudan and beyond through her teaching, research, and activism. Dr. Ali teaches in the Women’s, Gender, and Sexuality Studies Program, is a core faculty member in the human rights minor, and an affiliated faculty of the John W. McCormack Graduate School of Policy and Global Studies at the University of Massachusetts Boston.

Her teaching covers the areas of gender, intersectionality, critical development studies, human rights, and qualitative research. Dr. Ali’s current research focuses on three overlapping areas. She is working on a digital ethnography on women, social media, and activism in contemporary Sudan, and is also researching gender, militarization, and peace-building in Sudan and South Sudan, in addition to gender and HIV/AIDS in the Middle East and Africa.

Dr. Ali has written and published extensively in Arabic and English. Her book Gender, Race and Sudan's Exile Politics: Do We All Belong to this Country?, was published by Lexington Books, an imprint of Rowman and Littlefield, in 2015. In addition to her academic career, she is an activist and policy specialist who has worked at or consulted for several UN agencies, research institutes, and international, regional and national civil society organizations. She is a fellow of the Rift Valley Institute and is on the advisory board of the African Feminist Initiative.

Dr. Ali received her PhD in government (development studies) from Manchester University in the UK. She has a BA (Hon.) and an MA from the University of Khartoum and the American University in Cairo respectively, both in political science.

Khalid Mustafa Medani (’87) is currently associate professor of political science and Islamic studies at McGill University, and has also taught at Oberlin College and Stanford University. Dr. Medani received an A.B. in development studies from Brown University (1987), an MA in development studies from the Center for Contemporary Arab Studies at Georgetown University (1994), and a PhD in political science from the University of California, Berkeley (2003). His research focuses on the political economy of Islamic and ethnic politics in Egypt, Sudan and Somalia. He has published widely on the roots of civil conflict and the funding of the Islamic movement in Sudan, the question of informal finance and terrorism in Somalia, the obstacles to state building in Iraq, and the role of informal networks in the rise of Islamic militancy.

Dr. Medani has worked as a researcher at the Brookings Institution and at Stanford University’s Center for International Security and Cooperation (CISAC). He also served as a Homeland Security Fellow at Stanford University from 2006-2007, and has worked with a variety of international organizations including the United Nations Development Program (UNDP), and the UN Office of the Coordinator of Humanitarian Affairs. Dr. Medani has also served as a senior consultant for a variety of governments on issues such as the roots of Islamic militancy, the Darfur crisis, youth politics in Sudan, and electoral reforms in Morocco including the governments of the United States, the Netherlands, the United Kingdom, and Norway. He is a previous recipient of a Carnegie Scholar on Islam award from the Carnegie Corporation of New York and a very proud and devoted alumni of Brown.