Racialization and Racism in the Middle East: Historical Perspectives 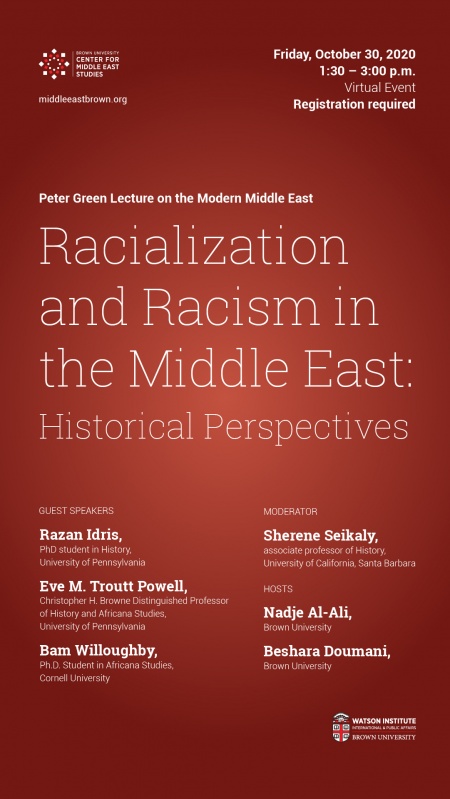 The Center for Middle East Studies' new research project, Racialization and Racism in the ME and its Diasporas, hosts Eve Troutt Powell, Christopher H. Browne Distinguished Professor of History, University of Pennsylvania; Bam Willoughby, PhD student at Cornell University's Africana Studies and Research Center; and Razan Idris, PhD student at University of Pennsylvania's department of History. The webinar is moderated by Sherene Seikaly of UC, Santa Barbara, and hosted by Nadje Al-Ali and Beshara Doumani of Brown University.

CMES is starting a new initiative to explore intersectional struggles around anti-Black racism and forms racialization in the Middle East and its diasporas. As scholars and students of this region, we are intimately familiar with the battles for dignity and freedom by colonized, occupied, disenfranchised and oppressed people in the region. We are inspired by and stand in solidarity with the Black Lives Matter movement and the millions of protesters in the United States and all over the world who are calling for justice and equality. Yet, merely declaring our solidarity in statements is meaningless unless we follow our words with initiatives and action that aim to challenge and transform the knowledge we produce and share, while also addressing our institutional biases and structural racism. This event is the first in a series in which we explore and critically engage with the long history and ongoing forms of anti-Black racism within the region and amongst relevant diaspora communities.

The research project is supported by the Department of Africana Studies.

Razan Idris is a Sudanese-American third-year PhD student in History at the University of Pennsylvania. She studies histories of blackness in Afro-Arab communities on the African continent and in diaspora. For her current project, Razan has been exploring black identity at the religious institute of al-Azhar in Egypt in the 19th and 20th centuries. Razan is also the curator of the online #SudanSyllabus open project, collecting English-language resources on Sudanese social, cultural, and intellectual history.

Eve M. Troutt Powell is the Christopher H. Browne Distinguished Professor of History and Africana Studies at the University of Pennsylvania. She is the author of Tell This in my Memory: Stories of Enslavement from Egypt, Sudan and the Ottoman Empire (Stanford University Press, 2012), A Different Shade of Colonialism: Egypt, Great Britain and the Mastery of the Sudan (University of California, 2003) and the co-author, with John Hunwick, of The African Diaspora in the Mediterranean Lands of Islam, (Princeton Series on the Middle East, Markus Wiener Press, 2002). . She has received fellowships from the American Research Center in Egypt and the Social Science Research Council, and has been a fellow at the Institute for Advanced Study in Princeton and at the Radcliffe Institute for Advanced Study. In 2003 she was named a MacArthur Foundation Fellow ,and in the Spring of 2020 she was named a new member of the American Academy of Arts and Sciences .

Bam Willoughby is interested in black historiographies of Ottoman and post-Ottoman worlds, proletarianization of Africans in the Ottoman Empire, geographies of African-descended populations in contemporary Turkey, climatology and morphology, how community relationships to agricultural labor tell time, relationships between so called Middle-Eastern and so called Western scientific discourse, indigenous epistemologies, how we can use this knowledge to challenge prevailing notions of blackness and the ways in which we might theorize what they term “black bios.” Willoughby's current research project investigates how the manumission of enslaved Africans in Northern Africa at the end of the 19th century and their subsequent relocation into Southwestern Anatolia for the express purpose of land cultivation—all within the context of their “freedom”—served as a driver for “black” identity formation in contemporary Turkey, and provides a scaffolding for contextualizing the kinds of conditions that have made “black” Aegean, rural living, livelihood, and survival (im)possible in contemporary Turkey.

Sherene Seikaly is associate professor of history at the University of California, Santa Barbara. She is the author of Men of Capital: Scarcity and Economy in Mandate Palestine (Stanford University Press, 2016). She is following the trajectory of her great-grandfather in her forthcoming book titled From Baltimore to Beirut: On the Question of Palestine. His trajectory from nineteenth century mobility across Baltimore and Sudan to twentieth century immobility in Lebanon places the question of Palestine in a global history of race, capital, slavery, and dispossession, She is co-editor of Journal of Palestine Studies, senior editor of Arab Studies Journal, and co-editor of Jadaliyya.