Hagar Kotef - Book Talk - The Colonizing Self (Or: Home and Homelessness in Israel/Palestine) 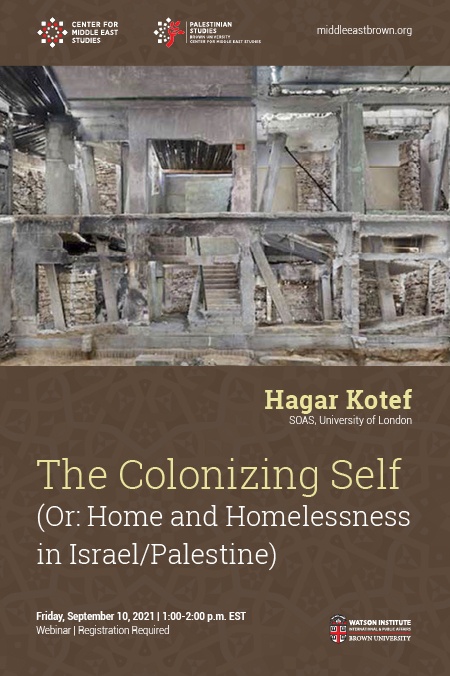 Colonizers continuously transform spaces of violence into spaces of home. Israeli Jews settle in the West Bank and in depopulated Palestinian houses in Haifa, Yaffa, or Lydd. White missionaries build their lives in Africa. The descendants of European settlers in the Americas and Australia dwell and thrive on expropriated indigenous lands. In The Colonizing Self, Hagar Kotef traces the cultural, political, and spatial apparatuses that enable people and nations to settle on the ruins of other people's homes and feel senses of belonging to sites of destruction. Rather than offering a simple account of injustice, the book curates a palimpsest of thefts and ruins, nested histories of exile and exploitation alongside the intimate, ordinary, cruelties of settler colonialism.

The Colonizing Self demonstrates how the mass and structural modes of violence that are necessary for the establishment and sustainment of the colony dwell within settler-colonial homemaking, and through it, shape collective and individual identities. It thus powerfully shows

how the possibility to live amid the destruction one generates is not merely the possibility to turn one's gaze away from violence, but also the possibility to develop an attachment to violence itself. That is, the book approaches the colonizing self as one that desires violence, not one that denies or disavows it, showing how violence becomes constitutive of settler identity. Kotef expands here the archive and methods of political theory, tracing this “violent attachment” through incisive readings of Arendt and Locke, reality TV shows, and ethnographies of organic agriculture. By developing its arguments through the familiar things of the home, its ruins, and its structural resonances, the book binds the everyday, national, and global. This movement foregrounds the urgency of exceptionalism, normalization, and comparison.

Hagar Kotef is a senior lecturer in political theory and comparative political thought at the Department of Politics at SOAS University of London. Her research interests are political theory, Israel / Palestine, settler colonialism, feminist theory, and liberalism and its critiques (specifically poststructural and postcolonial). Her most recent book, The Colonizing Self (Or: Home and Homelessness in Israel/Palestine), examines the construction of political belonging in settler colonies. It investigates how people develop attachment to space, not despite violence or by denying it, but rather through violence. The book was published in 2020 by Duke University Press. Her previous book, Movement and the Ordering of Freedom (Duke University Press, 2015) charts the conceptual history of mobility and immobility in the history of political thought and the structuring of political spaces: from the writings of Locke, Hobbes, and Mill, to the sophisticated technologies of control that circumscribe the lives of Palestinians in the Occupied West Bank.

Before joining SOAS, she held positions and fellowships at the Minerva Humanities Center at Tel Aviv University, the Department of Politics and Government at Ben Gurion University, Columbia University's Society of Fellows, and the University of California, Berkeley.