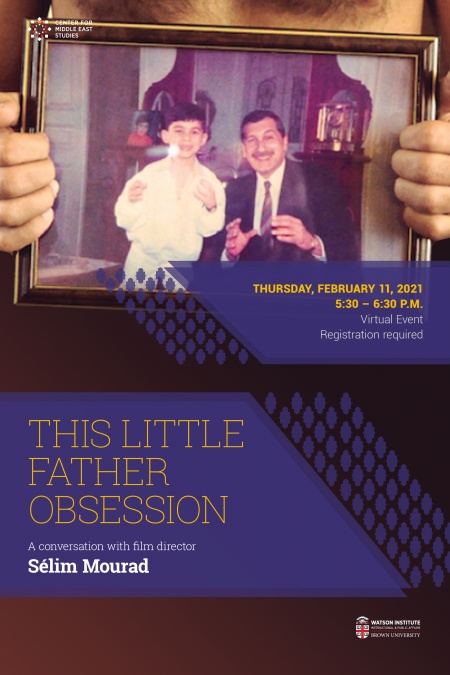 In spring 2021, the Center for Middle East Studies is hosting a series of activities aimed at engaging and celebrating the internal CMES community at Brown. For its first event on February 11, Center Director Professor Nadje Al-Ali and Rita Slaoui '23 co-hosted a virtual panel with Sélim Mourad, director of the film "This Little Father Obsession (امبراطور النمسا)," webcast to which we are sharing with our extended audience.

About the movie:
A house built by the director’s grandfather that had even survived the Lebanese Civil War will be demolished. The director—an only child—is gay, thus the family line will end with him. We watch what unfolds as Selim visits his father’s estranged younger brother. In this autofiction documentary, Selim, unable to inherit either his house or sustain the family line, uses beauty and humor to challenge his father, his family, and the patriarchal system bound up in tradition and religion—in order to find his own place in the world.

About the Film Director

Sélim Mourad was born in Beirut in 1987. He did both his bachelor's and master's degrees in directing and film research in IESAV - Université Saint-Joseph in Beirut.

His filmography is diverse:

- Short personal documentaries like “A letter to my sister” (2008) in which he started his exploration of his family dynamics and "A Trip to the barbershop" (Yamagata Intl Film Fest 2009).

- A first feature documentary "This Little Father Obsession" (Visions du Réel 2016) that lives a beautiful festival life and deepens the filmmaker’s queer gaze on notions of procreation and transmission.

He is currently a film teacher in Beirut and is working on developing his next project.