Rema Hammami - GBV Humanitarianism in Gaza: Gender Violence and the Geopolitics of Humanitarian Care and Immiseration 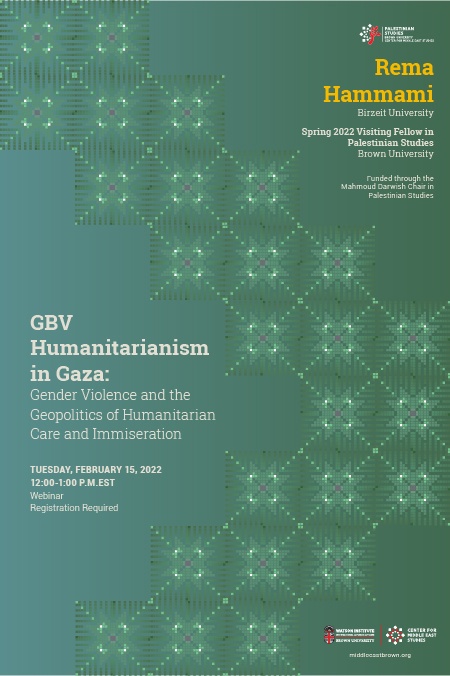 Under siege and international sanctions, while enduring massive and recurrent Israeli military aggression, since 2008 Gazans have become subject to a powerful assemblage of humanitarian actors and aid flows that have instantiated the prevention and treatment of gender-based violence (GBV) as the exclusive gender concern in Gazan society. Due to the international boycott of Hamas authorities, this humanitarian agenda has relied on local Palestinian NGOs and women’s rights organizations, in the process completely colonizing their previous activisms with the exigencies of treating Gaza’s “GBV problem."

This talk takes up critical analysis of humanitarianism as a “politics of care," but shifts the focus away from the exclusionary “whom” of care to the actual content: the “what” of care. By focusing on the modalities of normative GBV interventions in Gaza and how they operate on the ground, their role as a technology of rule within contemporary projects of global securitization becomes apparent, as does humanitarianism’s wider complicity with the ongoing immiseration of Gaza’s population.

About the Speaker
Rema Hammami, Spring 2022 Visiting Fellow in Palestinian Studies, Brown University. Hammami is a founding member of the Institute of Women’s Studies at Birzeit University where she is associate professor of anthropology. Founder and former chair of the University’s Right to Education Campaign and co-founder and former director of the Women’s Affairs Centre in Gaza, she is active on issues of academic freedom and gender justice in and for Palestine. Her current research focuses on the collusion between liberal peacebuilding/ neo-humanitarian intervention within the logics of ongoing Israeli military occupation with an emphasis on how the aid industry deploys gender in techniques of rule across the West Bank and Gaza’s fragmented geo-political spaces. She is a co-editor, with Lila Abu Lughod and Nadera Shalhub-Kevorkian, of the forthcoming book: The Cunning of Gender Violence: Feminism and Geopolitics (Duke University Press 2022). Recent publications include: “Follow the Numbers: Global Governmentality and the VAW Agenda in Occupied Palestine” in Janet Halley et.al. Governance Feminism: Notes from the Field. University of Minnesota Press (February 2019) and “Destabilizing Mastery and the Machine: Palestinian Agency and Gendered Embodiment at Israeli Military Checkpoints” Current Anthropology (February 2019). She has been a Carnegie Centennial Scholar at Columbia University and held the Prince Claus Chair in Equity and Development at the Institute of Social Studies in the Hague and serves on the editorial boards of the Arab Studies Journal, Jerusalem Quarterly, Middle East Report, Development and Change, and American Ethnologist. She is a founding member and current vice-president of Insaniyyat, the society of Palestinian Anthropologists.