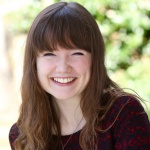 Anna Murphy is a senior in Middle East Studies. She is originally from Oxford, England, but now lives in Charlottesville Virginia. Anna's interest in MES began with her introduction to the department during her freshman year. As an Undergraduate Fellow, she is currently working on her thesis which aims to analyze the role of the British press in narratives of Islam and Muslim identity in the UK. Anna plans to conduct field research in London this summer. In addition to her interest in Middle East Studies, Anna spends her time listening to music, watching English football, and discussing international politics. She is also an avid fan of the West Wing!