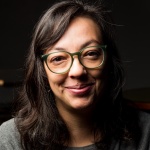 Natalia Borges Polesso received her doctorate in literary theory from the PUCRS (Pontifícia Universidade Católica do Rio Grande do Sul) and is a professor, writer, and translator. She published Recortes para álbum de fotografia sem gente (2013), Amora (2015), Controle (2019), and Corpos Secos (2020), among other works. In 2017, Natalia was selected for the Bogotá39 list, which brings together the 39 most prominent writers under 40 years of age in Latin America. She is currently a researcher in the national postdoctoral program at the Universidade de Caxias do Sul, where she is conducting research on geografias lésbicas/lesbian geographies. Natalia’s work has been translated in multiple countries, including Argentina, Spain, the United States, and the United Kingdom.