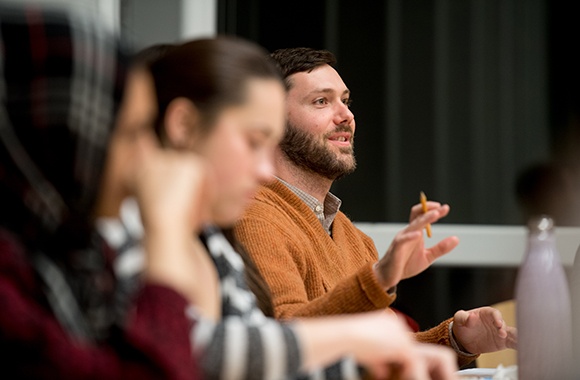 "Teaching [MES 0100] … I was most surprised by how useful the study of the ancient world is for troubling some of our modern assumptions, whether about how people practice and understand religion, the relationship between the governing authority and those it governs, or how people understand their community and their own place within it."

What are you working on these days and how does it fit within your larger research interests?

Recently, I’ve been researching indigenous forms of extralegal justice practiced among Palestinian communities—whether mediated reconciliation, tribal arbitration, or so-called customary law—in the twentieth century and even more recently. I’m interested in how these practices change over time, while simultaneously being cast as “traditional”—and, then, how “traditional” can take on positive or negative associations, as an expression of Palestinians’ authentic cultural heritage, for example, or as evidence of an outmoded mentality rooted in patriarchal structures. I’m interested in connecting these tensions to larger questions of colonialism and indigeneity in Palestine. In particular, how did different actors—British and Israeli officials, Palestinian disputants and mediators, lawyers and journalists—make different kinds of claims, whether implicitly or explicitly, about the characteristics of Palestinian indigeneity and how did these claims reflect different ideals of justice and political order? If, for example, a Palestinian was struck and killed by a car, what should be done? Should the state try the driver in the criminal courts? Should the family of the victim sue the driver for compensation in the civil courts? Should the families of victim and driver arrange to resolve the matter via local intermediaries? And how might the answers to these questions differ depending on who was answering them, the period in which it took place, or the identities of the parties involved? At the same time, my research compares the development of and changes to extralegal justice in Palestine to what we see happening in neighboring states, where the same practices exist, but where colonial rule differed significantly and thus the question of indigeneity was not so fraught.

I wrote an article for a special issue of Radical History Review, organized around “Policing, Justice, and the Radical Imagination,” that examines practices of extralegal justice during two Palestinian uprisings: the 1936–39 Revolt against the British Mandate and the 1987–93 First Intifada against Israeli occupation. I was curious to see how these anticolonial revolts drew on, but also remade, extralegal practices of conflict resolution in their efforts to disengage from colonial state institutions, including police and courts, and to build their own parastate structures. At the same time, I wanted to bring Palestine and Palestinians into a broader scholarly conversation about police and prison abolition that tends to be U.S.-centric.

You’ve just finished teaching a new foundational course, ‘MES 0100: The Middle East: Cultures and Societies.’ What surprised you most about teaching this course?

Teaching a new course is always a learning experience, but I think I was most surprised by how useful the study of the ancient world is for troubling some of our modern assumptions, whether about how people practice and understand religion, the relationship between the governing authority and those it governs, or how people understand their community and their own place within it. Take, for example, the Ptolemaic dynasty in Egypt: its rulers saw themselves as part of a larger Hellenistic culture and, at the same time, a continuation of Pharaonic rule in Egypt and, in many ways, they laid the groundwork for the emergence of a particular kind of Christianity in Egypt. All of which is fascinating in its own right, but also totally disrupts the stubbornly persistent (and Orientalist) association of Hellenism with European culture and history. (Plus, it gives me an excuse to show a clip of Elizabeth Taylor as Cleopatra in class.) Beyond this, one of the most exciting parts of teaching the course for me was being able to invite a number of Brown’s Middle East Studies faculty to give presentations about their specific research interests, from Manichaeism to Naguib Mahfouz, which allowed students a little taste of the really fascinating Middle East Studies research and classes that Brown has to offer.