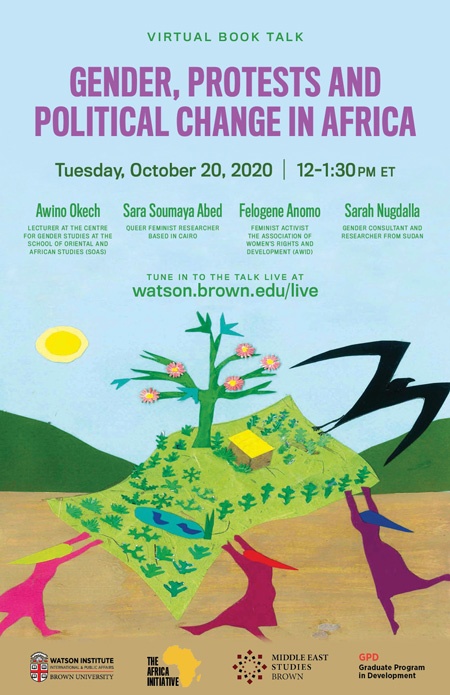 This event celebrates and discusses the recently published book Gender, Protests and Political Change in Africa which brings together conceptual debates based on case studies on the nature of state-building, youth, and gender in Africa. The book offers contemporary and interdisciplinary analyses on the role of protests as an alternative route for citizens to challenge the ballot box as the only legitimate means of ensuring freedom. Drawing on case studies from six African countries, the contributors draw on specific political moments in their respective countries to offer insights into how the state/society social contract is contested through informal channels, and how political power functions to counteract citizen’s voices. Pursuing an interdisciplinary approach, they offer a different way of thinking about state-building, gender, and structural change that goes beyond the system-based approaches that dominate scholarship on democratization and political systems. In effect, it provides a basis for organizers and social movements to consider how to build solidarity beyond influencing government institutions.

Commenters on the panel will include:

Sara Soumaya Abed is a queer feminist researcher based in Cairo.

Sarah Nugdalla is a gender consultant and researcher from Sudan.

Awino Okech is the editor of the book and a lecturer at the Centre for Gender Studies at the School of Oriental and African Studies (SOAS).

This event is part of the following series:

Racialization and Racism in the Middle East and its Diasporas
Gender

Co-sponsored by the Watson Institute, the Africa Initiative, the Center for Middle East Studies and the Graduate Program in Development